Neil Maclean-Martin in his relentless search to develop exercise programmes to improve performance and prevent injury has developed a set of new core exercises which he calls “the Clank”. Use the Clank to take your core workout to the next level!

Firstly what is the Clank? If you have done any of the SkiFit workouts you will now be very familiar with the side plank which is the exercise that works your obliques in the core routines. Well a Clank is basically a half side plank, so you lean on the point just below the outside of the knee rather than on the feet, which again targets the obliques. However the Clank combines this with a more focused glute contraction (GMed) as seen in a Clam exercise. The result is a Clank that works the obliques and the glutes at the same time.

Assume a side plank position with the body positioned sideways, propped on one bent arm with the body held straight with a very slight bend at the hips. Unlike the side plank the lower leg contact with the floor is from the knee to the foot rather than just on the foot. The upper arm and leg are free to move in this position and so Clank based routines can involve many different movement patterns of which there are an infinite variety. Watch the video to see some of the possible variations. These added movements simulate some of the normal forces that go through the body as part of our normal movement patterns. What you will find with the Clank is that the forces are considerably higher that we normally feel. This creates an overload and strengthening effect.

Why (now for the science bit)

When we stand on two feet we are generally in balance and stable, with each leg acting as a pillar keeping up one side of the body. As soon as we move onto standing on one leg all that changes, suddenly we have lost one of the pillars holding us up. The body is much less stable and requires muscle action to create the stability to compensate for the missing pillar. The main action is to move the bodyweight more over the weighted foot and activate the glutes and obliques. If the glutes don’t increase their work, the pelvis doesn’t stay level and the obliques must work to keep the upper body straight without bending to the side. These two actions resist the Coronal collapse or the tendency for the pelvis to drop, the weighted knee to drop to the inside and the arms to be held wide to help with balance. In the long term a lack of stability and strength in these muscle groups will likely lead to foot, knee, hip and back pain and it will also compromise sports performance.

Who should be doing the Clank?

So who should do the Clank, there are three groups:

Firstly, I recommend that everyone has a go at the Clank on both their right and left sides. If you detect a difference between the sides in how long you can hold the position with the upper leg held out straight or one movement feels particularly weak on one side, then you should spend some time working on that side. Everyone should aim to hold the standard Clank position (upper leg and arm held straight in line with the body – see below) for at least a minute. 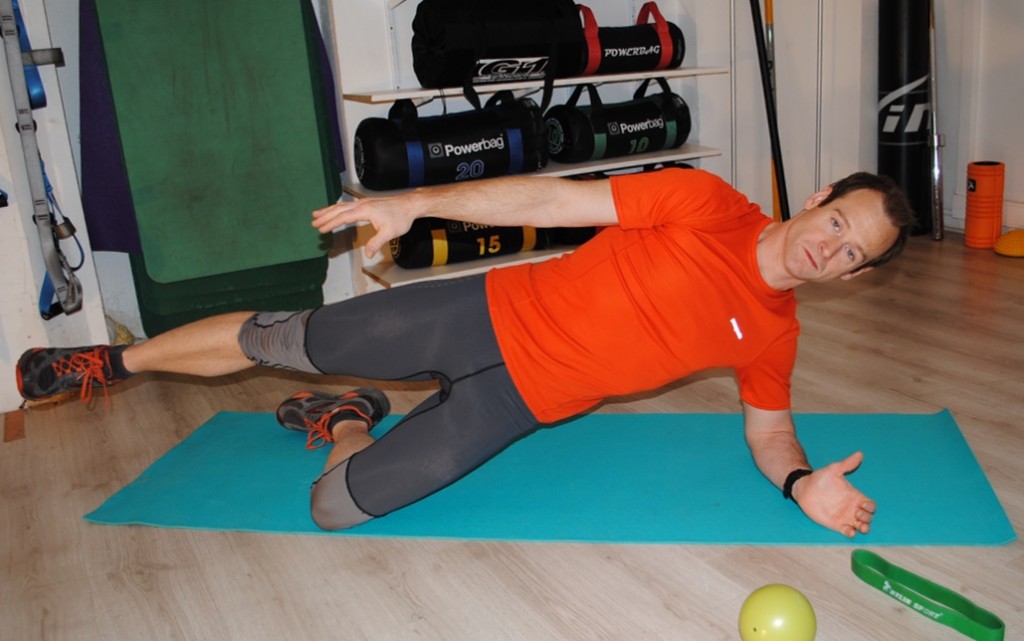 Secondly, anyone coming back from an injury, especially the ‘simple’ ankle sprain. If you have been limping for even a few days you should invest some time getting the symmetry back in your body because the injured side will quickly lose strength. Ever wondered why people keep spraining their ankles? This is often a result of weakness in the body, not just around the ankle.

Finally anyone looking to improve their sports performance, there is no sport that will not benefit from working the glutes and obliques together as this ensures the legs and body are connected. The main sports, however, are skiing, running and racquets sports.