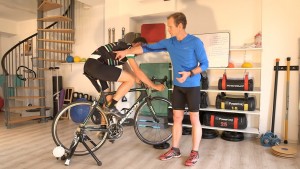 Neil has treated thousands of injuries which he believes could have been prevented. He is regarded as a specialist in his field of rehabilitation and his diagnostic skills are exceptional, a result of working in the demanding world of elite sport for over fifteen years. He established La Clinique du Sport in Chamonix-Mont-Blanc in 2009 and this is now the base from which he works extensively both with elite and amateur athletes in the sports of triathlon, running, cycling, climbing and skiing both to improve performance and also in injury recovery.

By correcting muscle imbalances and screening for faults fundamental to movement patterns prior to training, he believes you can improve technique and prevent injury, enabling triathletes to reach their full potential. Therefore, with the benefit of sound clinical based evidence and significant experience he authored his ‘prehabilitation programme’ and TriFit is the result. TriFit is designed to be easily incorporated into day-to-day training programmes and to give athletes confidence in their movements. The results are higher performing athletes who can move faster because they’ve improved their efficiency but also who can train more consistently because they pick up fewer injuries.

“Triathlon is an endurance sport based on consistency of training and it never ceases to amaze me that even tiny imperfections in peoples’ movements can lead to common and preventable injuries,” commented Neil. The programmes are unique in that they are based on clinical research and the expertise of leading sports physiotherapists with input from professional coaches and athletes. Triathletes looking to improve their performance and prevent injury need look no further than adding the newly launched TriFit programme to their training routine.