Last weekend I was given the opportunity to compete in a 24 hour cross-country ski marathon in Switzerland (Ski-24).  Let’s get some of the numbers sorted first – there were 61 teams consisting of mostly ten members, there were two solo guys and five teams of three of which we were one, that meant roughly eight hours each.  It was a four kilometre course with about 160m of up and down every loop.  Between us we managed 83 laps which added up to 332km and about 13,500 meters of ascent – the longest time between changes was about a minute.  We were very pleased to pass the 300km mark and to finish 33rd overall.

Ok that’s all well and good but where’s the big life lesson?  Well the back story is that even though I’m quite fit – 6 years of mountain ultra running and ski mountaineering gives you a good fitness base – I hadn’t done any cross-country skiing in over two years.  Stupid or courageous I’ll let you be the judge of that.  So after my first session (we each did about ten of 30-60mins) I was terrified.  I had an average heart rate of 90% of maximum.  If you aren’t up to speed on your sports physiology that means I was above ‘threshold’ and that means it was unsustainable.  If the first one was hard then the rest would actually be impossible, my body would simply give up.  The problem with cross country skiing is that you can’t just slow down to make it easier – all that happens is that you basically stop, or if you’re on a hill you start going backwards.  If you aren’t pushing hard and gliding between strides, then you exponentially lose out.

The first lesson was to take stock and realise that I was, literally and 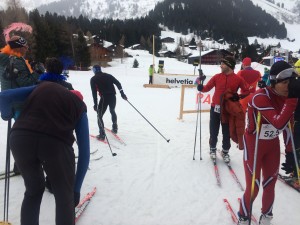 figuratively on a very slippery slope.  If I had just kept on doing what I was doing, as brave and courageous as it was, it would have without doubt taken me and my team / company down with it.  You must be prepared to work on your business not just in the business.

Second lesson, good market research, benchmarking and improving my ROI (return on investment).  Efficiency was the goal so I followed as many good skiers as I could, copying their movements, pole plants and techniques.  It didn’t take long before I was moving better, same speed slightly less effort, I had bought myself some time.  Trouble was with each effort I was getting more and more tired and the tank emptying. 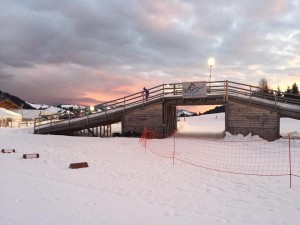 The third and most important lesson was what allowed me to keep going through the night and into the next day without missing a turn.  Self-discipline defined by Elbert Hubbert and quoted by Brian Tracy is as follows – “Self-discipline is the ability to make yourself do what you should do when you should do it, whether you feel like it or not”.  How did I apply this – well between each of our legs we had about an hour and a half of rest.  It included a bunk room 200m from the ‘pits’ or start/finish line.  In order to finish the race I had to exert significant levels of self-discipline to leave to course quickly, get back to the room, get dry, warm, change, clothes, prepare clothes for the next leg, try and get some sleep while trying to calculate how long the next guy would take, when he took over and also what would happen when the clocks changed.  You might think this should be taken for granted, however not all the teams were there trying to win.  If you have ten in your team you can afford to have longer rests between efforts, you can do the event in fancy dress (or almost no dress at all – it was quite warm), full of barbeque burgers and sausages, wearing a wrist band that indicates you are a ‘competitor’ and therefore shouldn’t be served ‘too many beers’.  All this seemed very un-Swiss but enormous fun at the same time – won’t even mention the crazy Sweeds and the chain saw that was substituted for encouraging clapping.  Through the night it felt like groundhog day: ski, sweat, collapse in a heap, room, food, clothes, alarm, increasingly difficult get-ups, dress ski repeat.  Without the discipline the wheels would definitely have come off. 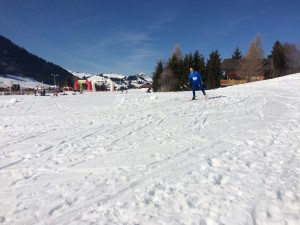 allow positive thoughts into your mind.  One of my team mates (the strongest athlete by far) was knocked sideways in the middle of the night by a crushing sense of why am I doing this? This is stupid and pointless.  He had really struggled for an hour with these heavy thoughts.  What had happened was that he’d had been in a really deep sleep just before jumping up and having to leave the warm room for the cold night and his mind was telling him where it thought he should be and it wasn’t skiing endless loops round the same course at 3am after having already been at it for 15hours.  Sure enough with some food and a hot tea those feelings passed and he found his ski chi again – it did help joking around, laughter always helps. 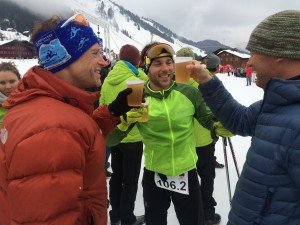 Lesson five – you sometimes have to put yourself out of your comfort zone, I felt like I was on another planet inhabited by strange semi-clad lycra infested beings with very long feet and long pointy hands that were capable of incredible speed across the frozen tundra.  Some people love jumping in at the deep-end and seeing if they can swim.  While its not for everyone the result for me was almost like finding a new sport, certainly a new technique (saved a fortune on lessons) and the chance to realise again what success is about no matter what aspect of your life; family, finance, career or health.

Set a goal (one that you really want to achieve), work out how to get there, work hard but keep looking up to see you are going in the right direction, learn from others (there’s nothing wrong with a short cut its called efficiency), be mentally strong, self-disciplined, share the experience with others and realise that against the odds you can succeed.

Neil Maclean-Martin
Co-founder and Director at BeFitApps
Neil is literally the brains and the brawn behind the BeFitApps programmes bringing his years of experience treating some of the world's leading athletes into training programmes that we can all benefit from. He is also one fit bloke who does ultra trail races for a bit of fun!