Two weeks ago we saw the final skiing at the Grand Montets ski area in our home town of Chamonix and while some of us will be heading to the high glacial alpine venues or even further a field in the Southern Hemisphere to continue to satisfy the need to ski this summer, most of us will be hanging up our boots and planks until next season.  But here’s the thing – contrary to popular belief, this doesn’t mean that the SkiFit training should end!! 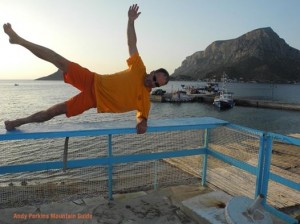 The exercises in SkiFit are important to maintain year round strength and conditioning for your favourite sport.  If you want to get a head of the game next season, if you want to start out strong and long, if you want to avoid injury, we thoroughly recommend that you continue with SkiFit through the summer.  Once or twice a week will be enough the keep those ski muscles strong, to maintain endurance and to sustain all that dynamic control that you worked so hard to gain this year. 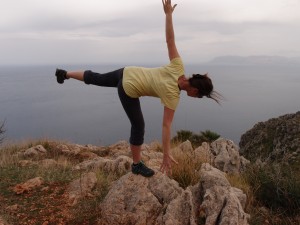 Rachael does some balance training on a mountain in Sicily

Not only will you be super fit, strong and ready to go next season, you will also see great crossover over into your summer sport – whatever that may be(as long as it’s not paragliding!).  Due to the emphasis on the training of core muscles, SkiFit is the perfect cross training for many other activities such as running, triathlon, and even cycling. 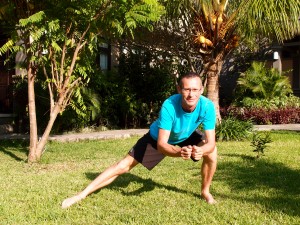 Tony’s even doing SkiFit in Bali!

So if you want to avoid those few days of pain that you got when you started your SkiFit training last year, keep it up, you won’t regret it! And if you’ve got any pics of you doing your SkiFit exercises in balmy sunny locations this summer, send them over to us – we’ll share them on our Facebook and Twitter pages and you might even win a FREE membership to BeFitApps!

Sign up to become a BeFitApps member to get access to your summer SkiFit training programme here.

Rachael Lowe
Once called the Queen of ePT Rachael is probably the world's most internet savvy physiotherapist and has built some of the most popular and largest physiotherapy websites online. Away from work she runs, climbs, skis, cycles, horse rides, scuba dives, windsurfs you name it!