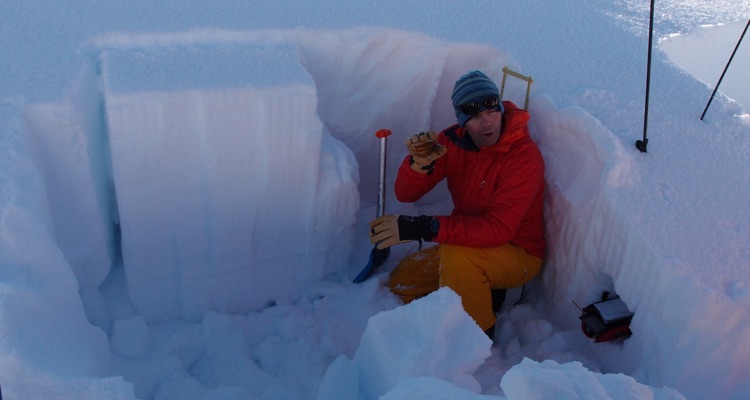 Learning to dig and interpret snow pits with the experts on the Avalanche Geeks level 2 course reveals the benefits and limitations of this technique.

Following the great avalanche level 1 course we attended in 2014 with the Avalanche Geeks (AKA Bruce Goodlad and Mike Austin) we followed up this year with a level 2 course. This course over 3 days revisited the same topics of snow, terrain and the human element, but went deeper into more geekery including some very graphic and thought provoking case studies, explorations of metamorphic changes within the snow pack, participating in a very realistic multiple burial rescue scenario and the digging and interpretation of snow pits. Over the 3 days of the course we were given the opportunity to dig multiple snow pits in various locations in the backcountry around the Tignes ski area and to practice examining the layers of snow types and the interfaces between these layers present in each of these pits, quantifying the structure, strength and energy observed and finally the standard methods to record and communicate our findings with other snow geeks and the wider skier community.

Probably the most exciting part of each snow pit was the opportunity to practice a Compression Test (CT) and Extended Compression Test (ECT) where we really got to see how skier forces could impact the structure of the snow pack causing collapses and the propagation of cracks and failures which could ultimately result in an avalanche. Digging a snow pit provides first hand knowledge of the snow pack you are dealing with and may be the only way to get this information when forecasts are not available or are unreliable. It also provides a method to track the development of a known problem within the snow pack (e.g. a persistent weak layer) to see if this exists in a particular location and aspect and/or is getting worse or better over time. With experience pits will help you to understand the widely varying characteristics of snow pack structures and how these differ by location, change with time and relate to different levels of hazard. So they are a great tool for skiers in the back country however even in the limited experience we gained during the course there are several issues to be taken into account when using them to make decisions.

Even with practice digging a snow pit and carrying out these tests takes a considerable amount of time, at least 30 minutes, and you can get quite cold! So you are unlikely to be digging many on any particular day or trip! This means that information from a snow pit should be combined with techniques such as pole tests (push an upside down ski pole into the snow feeling for changes in resistance that indicate different layers present), hand shears (mini compression tests dug by hand in the upper softer layers of snow), ski shear tests (skier loading of a safe test slope). These can all be carried out much more quickly and in more locations but are less quantifiable and rely on greater experience to interpret.

When you dig multiple pits you quickly see how the snow structures found will vary dramatically on any given day according to the location, elevation, surrounding topography and aspect of your pit location. For this reason any pits dug should be in locations that mimic the slopes of most importance for any particular skiing trip. That is they should be un-skied, at a similar elevation, angle (steepness) and face in the same direction (aspect) as the slopes above 30 degrees that you are planning to ski, so that the structure seen is likely to be indicative of the conditions you are exposing yourself to avalanches on.

Bear in mind though that You must ensure a location selected for a pit doesn’t itself present an avalanche danger, so only relatively small features without terrain traps are appropriate. 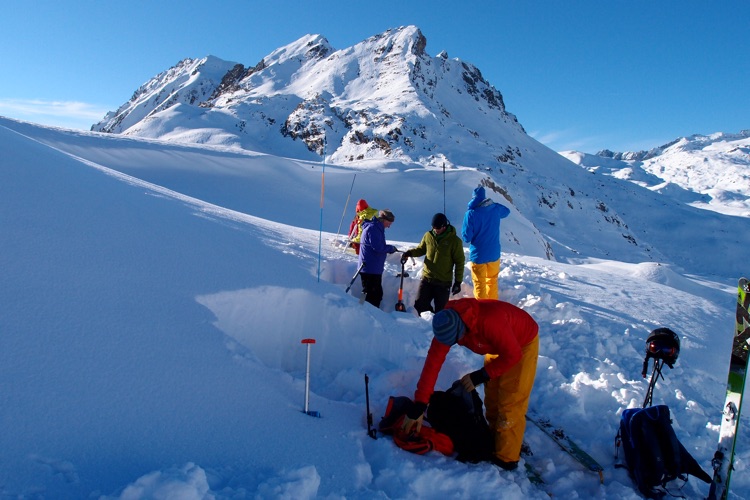 The class digging their pits in the Tignes back country

When as a team we dug multiple snow pits in the same snow bank the snow structure we observed across the pits was very similar. However there was quite a bit of variation in the Compression and Extended Compression Test results between each pit. This highlights that these results should be interpreted conservatively as there can be a significant variation in the response to loading across any given slope and the observation in a single pit cannot be assumed to be representative of all similar slopes or even the majority of a single slope.

As with all things there is no substitute for experience and being able to practice the construction and interpretation of snow pits with two very qualified and experienced practitioners was a key benefit of doing this course and greatly accelerated our learning. However as the geeks themselves pointed out a snow pit is just one way of gathering information and evidence about a snowpack on which to base your skiing decision making. This information gathering should start before you even set out on your days skiing (e.g. with on-line weather and avalanche forecasts, the social media activity of skiers and guides in the area) and should not stop throughout your day (e.g. observations of snow conditions, previous avalanche activity and the feel and response of the snow as you ski etc).

A snow pit is just one data point that can be added to and compared with all the other information you gather and evidence you observe. This must all be taken into account before you leap off that cornice and commit yourself to that gnarly slope!