Ten days ago I ran across the finish line of the OCC, an ultra marathon that makes up part of the infamous Ultra-Trail du Mont-Blanc (UTMB). 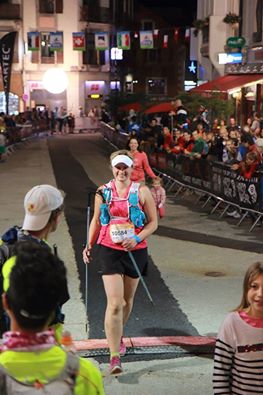 The race had started in Orsiers, Switzerland and finished 53 kilometers later in Chamonix-Mont-Blanc, France. Along the way I had to navigate 3,300m of elevation gain and crucially stay ahead of the time barriers and cut-off points. It was my very first ultra and I made it home in 14 hours.

Running 53km was a serious step up for me, the furthest I had run in an event before this was a measly 16km last year. I say ‘measly’ because living in Chamonix can be pretty humbling – everyone here is an uber athlete, an ultra runner, endurance fiend, competitive cyclist, extreme skier, ripped climber….the list goes on and on.

Reaching the finish line of the OCC was huge for me and it is taking some time to sink in. All week, clients have been coming into our physio clinic – La Clinique du Sport – congratulating me and I can tell that some of them are genuinely amazed that I actually made it round! You see, I’m no ultra runner by any stretch of the imagination and my motives for doing the event were never anything to do with a love of running!

After some years in the wilderness, I signed up to this epic challenge in order to get back to fitness and to kick-start a healthier way of living. Training for the event was time that I was finally taking for myself and a reason to get out and be alone with my thoughts and get a little perspective. Luckily I’m married to Neil, a fountain of knowledge on training and everything ultra so instead of searching Google, I just asked him for advice, I can’t say that I followed everything to the letter, but in general I followed his advice to train in zones and also train by covering the altitude, I didn’t rely on covering the entire distance. The longest distance I did in training was 35 kilometers, however I’d been regularly knocking off 1,000 meter climbs in training, less distance more ascent. This worked for me and knowing that I could climb the steep sections gave me confidence for the race.

My race started at 8.15 in the morning in Orsiers, Switzerland which meant I was reserved on an organised bus leaving Chamonix at 5.20am. I hoped to get into bed early the night before and get as much sleep as possible ‘ha ha!’, my evening involved getting the kids to bed (hoping my three year old would sleep through the night), having a final pre-race check and trying to chill out which involved some TV, a gin and tonic and Sushi for dinner.

Neil was running the TDS (Courmayeur to Chamonix) a 119 kilometer race with 7,350m D+. I was constantly checking his progress and that of our friends and clients running since you can check their progress on the ‘Livetrail’ website or pay to have text alerts when they run through check points. I managed just two hours sleep before I woke up and that was it for the night. I couldn’t sleep, not through worry about my race but making sure that Neil was going to finish, I was also leaving post it notes everywhere to congratulate Neil on his result and also to remind him of what time to take the boys to school and pick them up.

On the bus over to the event, I slept for an hour which was blissful, I met a friend and we queued for what seemed hours in the toilet line, they never provide enough toilets at the start of these races for nervous bladders. I wasn’t nervous about the start, having supported Neil in ultra-events over the past five years I knew a lot about the organisation and atmosphere, so I was calm and in the moment for the start. The weather report was spot on, cool in the morning, getting warmer throughout the day and no rain expected. 1,600 runners nervously jostled for position, a drone was flying overhead taking video and everyone was taking selfies. We all started and I started crying! I was here, strangers were clapping and cheering for me! When so many horrible things are happening around the world to innocent people, its humbling being in an environment in which solidarity and support are on steroids. The warmth and energy received from local residents, fellow runners and the hundreds of volunteers is truly inspirational and it’s why I’ve lost my voice every year when I’ve cheered loudly and continuously at these events.

My biggest goal was to run my own race, not anyone else’s. This was difficult as the crowd’s infectious cheering propelled you on to run faster and faster: they cheer louder when they think they have helped you to move more speedily, but we’re following our heart rate so we can’t sometimes. Local etiquette is a ‘merci’, wave, smile, and nod of the head in acknowledgement. The scenery throughout the race was beautiful, not that I saw a lot of it because I had my head down, keeping to pace and concentrating on good movement (protect the knees!!!).  My biggest advantage was that I placed no pressure on myself for a time, only to run within the time barriers of course – I just wanted to finish.

I’m probably boring everyone now, so I’ll summarise: my knees hurt and swelled up, but thanks to the ‘RunFit’programme I knew how to treat them during the race. For nutrition I used Hammer’s Perpetuem and ate one Hammer bar during the day, I didn’t feel like eating anything more. I took on electrolytes however really craved only water and the odd glass of coke at a refreshment points. I smiled and when I wasn’t smiling I made myself smile and that lifted everything. I finished strong, having the energy to overtake many people on the second part of the course and moved well on the technical sections.

As I approached Chamonix, I thought about the journey, my first training run and how unfit I was. I thought about my boys and I made myself slow down. I felt grateful for every step as I approached the finish line and as I crossed it with my arms and poles held aloft, I knew I was now an ‘Ultra-Addict’.