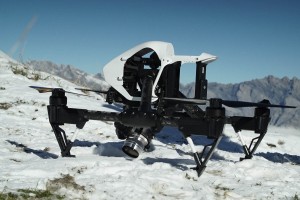 Shout it from the bin, from the chair-lifts and tows, “This years must have fashion accessory is here to capture your every turn in ultra dynamic high definition. Helmet cams and selfie-sticks are just so last year. Now it’s the turn of the drone.”

Our technologically accelerated world has showed us all manner of marvels. The GPS driven ski speed & distance app for the mobile phone has been with us for a number of years promoting the hard and fast. The helmet with on-board camera has been added to with cameras mounted on extending sticks and chest-straps.

Now, just when you thought that the potential to pose and posture could get no bigger, is drone technology set to invade the media and air spaces of the ski-resort ? Launched above the slopes, buzzing like some bumble-bee on steroids, ready to capture a glorious run down the piste, the reality has the potential to turn out somewhat different.

Probably the best outcome that could be hoped for is a few minutes of footage of graceful turns with a spectacular backdrop. The worst is that the ‘drone operator’ manages to slice the blades though the lift queue or crash into a snaking ski-class of six year-olds. The flight of the drone is something to be very concerned about.

With the crash in the costs of a quad-copter they are now well within reach of the everyman skier but with that comes the potential blatant disregard for others out enjoying the slopes. Last week I looked at a man’s hand that had done battle with one of the rotors of a drone. The scars were still much in evidence months after his accidental encounter. The chances are that it will be only a matter of time until a major catastrophe strikes and with this will come the full force of the law. 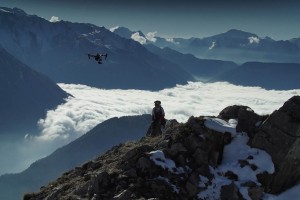 Regulation and licensing each UAV (unmanned aerial vehicle) together with the demand for some form of pilot qualification is already with us in many countries. The US insists on a private pilot licence, Canada has a bespoke UAV course and the UK has a Civil Aviation Approved course to be able fly a drone commercially. Across Europe similar schemes exist. So what if you’re flying for fun? Should that allow you to be less qualified and less responsible?

But technology is advancing again. Drones that can track a subject once airborne and that benefit from sophisticated crash-avoidance systems are surely capable of looking after themselves. Or is this is still a disaster waiting to happen on crowded slopes with the unpredictable, complex movement patterns of boarders and skiers coupled to the possibility of technology malfunction.

There is no denying that the drone is a powerful filmmaking tool providing a dynamic perspective on a subject. I have used them professionally to film road-biking, mountain biking and climbing with great effect, always flown by experienced, qualified operators. Personally I’m not convinced that opening the skies on a free-for-all is a good thing for the out-of-control or crashing drone does have the capability to inflict serious harm and to what purpose? No one is interested in watching hours of ‘normal’ skiing even if it is from the air. Rather than the footage being the envy of the other snow-sports enthusiasts, YouTube channels will just become gummed up with the modern equivalent of the holiday movie that no one really wants to watch coupled to the risk to other snow-sports enthusiasts.